Crab, asparagus and pistachio salad with lemon and basil dressing 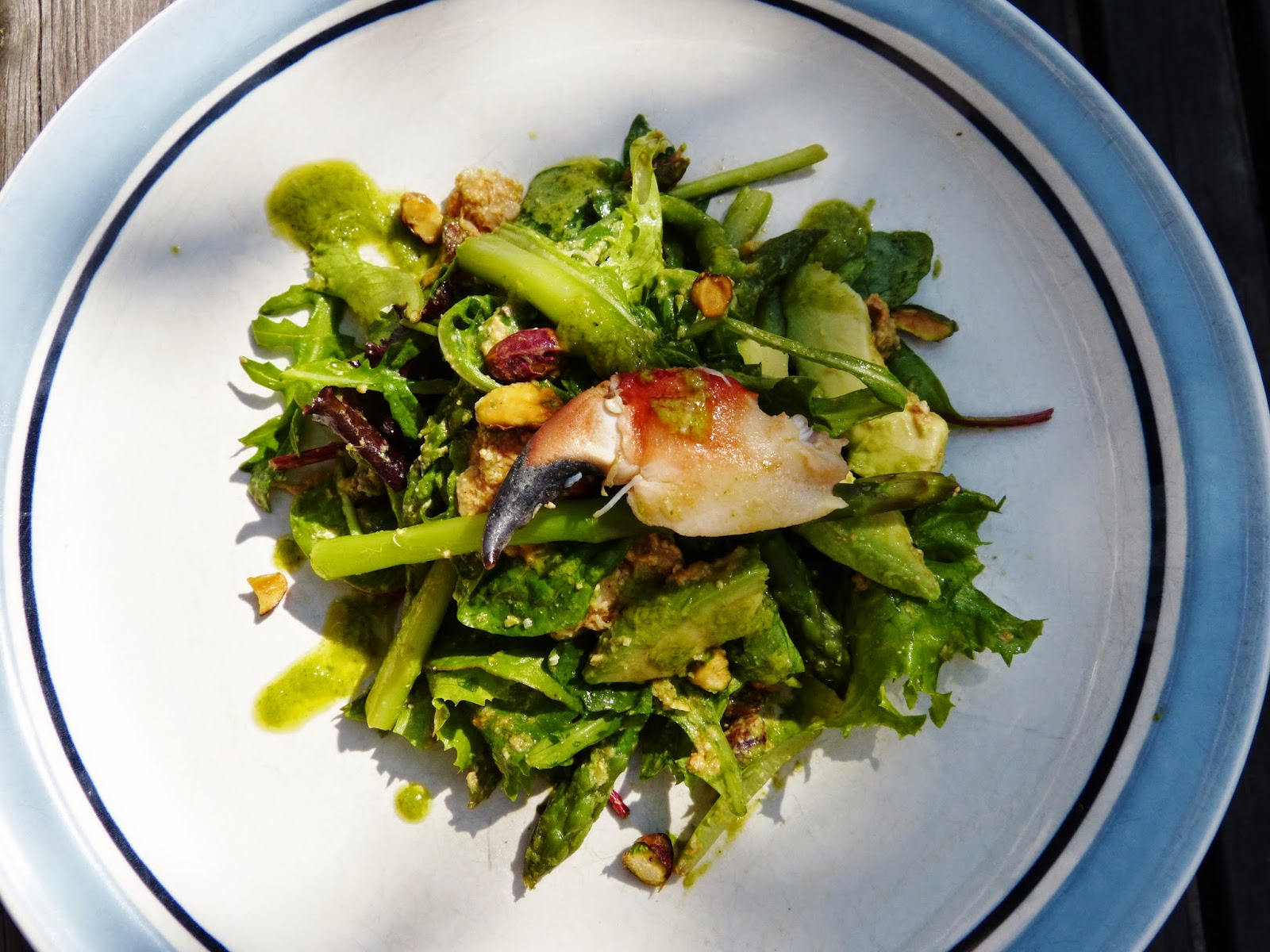 I made this lovely light salad for lunch on the bank holiday weekend just gone, and it was so delicious that I thought I'd add the recipe to my blog. I like using pistachios for this, as they are my favourite nut, and they give the salad a bit of crunch. You could swap them for other nuts or seeds if you prefer- toasted almonds would work well. This recipe is packed full of healthy things (asparagus, pistachios, crab) so it's good for you too! It would also make a nice starter for a meal too, as it's not too heavy.

Bring a saucepan of salted water to the boil. Fill a separate bowl with ice water. Blanch the asparagus for about 5 mins. Keep an eye on it, because it's easy to overcook- you want it to still have a bit of a bite to it. As soon as the asparagus it down scoop it out and plunge it straight into the prepared ice water. Once it's cooled, drain and put to one side in a bowl.

Blend the olive oil, lemon juice, basil, shallot and half the parsley in a blender if you have one. If not, you can chop the herbs and shallots as finely as possible and mix it all together- use a pestle and mortar if you have one to really mash it all together. Season it, and see how it tastes- you can alter the recipe to your own taste (e.g add more basil if you like).

Add the salad leaves, pistachios and the left over parsley to the asparagus. Add half of the dressing and toss together. Then add the crab (reserving the claws) and the sliced avocado. Pour over the remaining dressing, season well with salt and pepper, and toss together again. Serve in plates or bowls, and top each serving with a crab claw. I like to serve mine with some nice crusty warm bread and butter, and perhaps a bit of mayonnaise on the side too.

Ideally, enjoy outside, with a glass of chilled, crisp white wine!


Posted by Georgie Hodgson at 08:42 No comments:


A reunion with school friends is always a great excuse to have a good meal and try out a new restaurant, and so on Thursday night, a group of us agreed to meet at Copita, a Spanish tapas bar in Soho. I'd heard some good things about this place, and looking at a few online reviews, all of which seemed to be really positive, I was excited to give it a try.

Copita only takes reservations for lunchtime, so we were unable to book for our evening meal. We got there for 6ish, and there was plenty of space, so we got a table and started to peruse the gin menu (yep, a whole menu of different gin and tonics) and soak in the atmos. Having recently returned from Madrid, I can say that Copita does have a very Spanish feel, with bar seating and Serrano hams hanging from the ceiling. It's got a nice, relaxed vibe, and that combined with an extensive gin menu, gave me a good first impression. We ordered some gins, and moved onto the main menu.


The tapas menu, which apparently changes daily, was a fairly compact, consisting of your standard Spanish chorizo, hams, olives and bread, plus a few fancier things like anchovies with pork crackling, truffled goat's cheese with almonds and honey, and ajo blanco (white garlic soup) with beetroot. We ordered a good selection of different tapas and waited in anticipation. 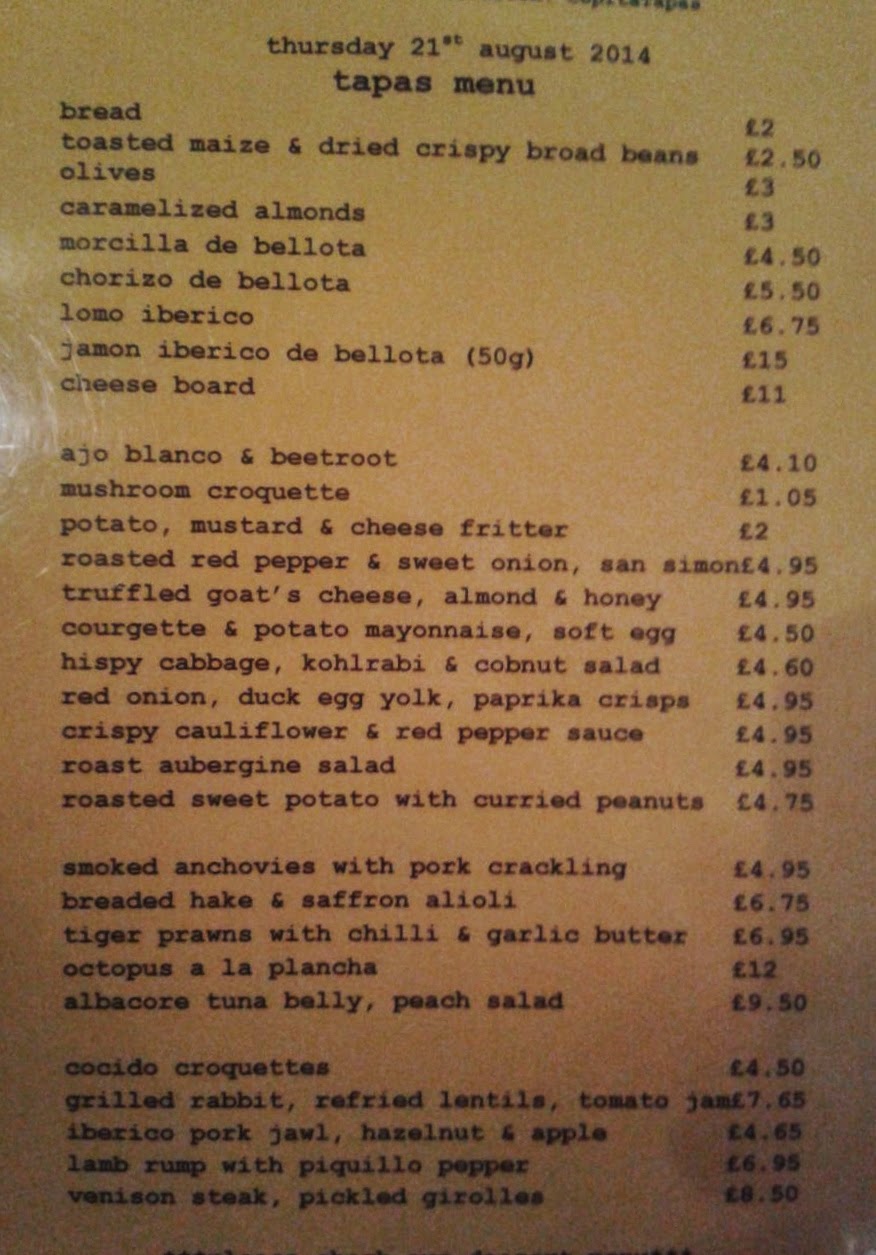 The first of our dishes to arrive was the chorizo. It was the thinly sliced, cold chorizo, rather than the cooked, thicker chunks of chorizo that I was expecting. However, it was totally delicious, and infact this was my favourite dish of the night- great quality and perfect to pick at whilst having a drink. Slowly and steadily, small plate after small plate arrived and our table. The truffled goat's cheese with almonds and honey had a good strong flavour, and I liked the idea of it, but it was extremely rich. Too rich for me infact, and you get a fairly hefty portion of it, served with little crostinis. The mushroom croquettes (£1.05 each), were not seasoned enough and were pretty forgettable, as were the potato, mustard and cheese fritters which were also basically croquettes (£2 each, slightly bigger than the mushroom ones). Amongst the croquettes I've had, I didn't rate them. The lamb rump with piquillo pepper was good, but not outstanding. The red onion, duck egg yolk and paprika crisps was a pleasant surprise for me. I couldn't quite see how that would come together, but I liked it; it was moreish, and the duck yolk was lovely and creamy and perfect to dunk the crisps into.


We decided against a pudding, and were just making our way through the rest of our wine, when one of the waitresses told us she needed the table in 10 or 15 minutes, could we finish up please. Maybe I'm old fashioned, but I don't like to be told to hurry up, even if it is in busy Soho on a Thursday night. I understand that a restaurant needs to make its money, but I think it's kind of shooting yourself in the foot a bit, if your paying customers who have just spent a fairly large amount on food and drink in your restaurant, are made to feel rushed. I wasn't too impressed with that to be honest, especially when the bill worked out to be over £30 each, which for me is alot for a meal out. Anyway we aren't the sort to put up a fuss, so we just said yes of course, but didn't rush our wine too much....until 10 minutes later when we were told again to hurry up. After that it was just getting a bit stressful so we gulped our wine and left.

Would I go back?

I wouldn't go back for a meal. I'd go for a pre-dinner gin and tonic, and perhaps a plate of chorizo. But kind of grudgingly. Initially I really liked Copita. The vibe early on in the evening was laid backed, the gins here are fantastic (expensive, but nice for a treat), and it does feel like a little bit of Spain in the heart of London. However, I wasn't overwhelmed by the food, which I thought on the whole was a bit pretentious, and lacked the wow-factor. Maybe we ordered the wrong things, but it was a little bit of a disappointment for me, after hearing alot of hype around it. My advice would be to keep it simple- go with the hams, chorizos and cheeses.


Posted by Georgie Hodgson at 10:26 No comments:

I thought I'd post a few of the pictures from the shoot I assisted food stylist Katy Greenwood (www.katygreenwood.com) on, for Jamie Magazine. I had a great day assisting Katy, with food photographer Will Heap (www.willheap.com) taking some lovely pictures of the delicious food. I learnt alot from chatting to Katy, and have since assisted her on other shoots since, which has been good experience.

It's alot of fun seeing all the beautiful props on the shoots, although it does make me slightly envious wishing I had such nice crockery! It's also great to try out new recipes, and assisting Katy and other food stylists is really developing my skills and knowledge of professional food styling. Best of all, you get to eat the food you've cooked after you've photographed them (no point in wasting it!), so I've been eating like a King, trying all sorts of new things.

We went through about 7 or 8 recipes in one day. Katy wrote all these recipes herself aswell, so they were very easy to follow and tasted great. These aren't the best quality images of the magazine I'm afraid...but better than nothing! More photographs from my other shoots to follow: 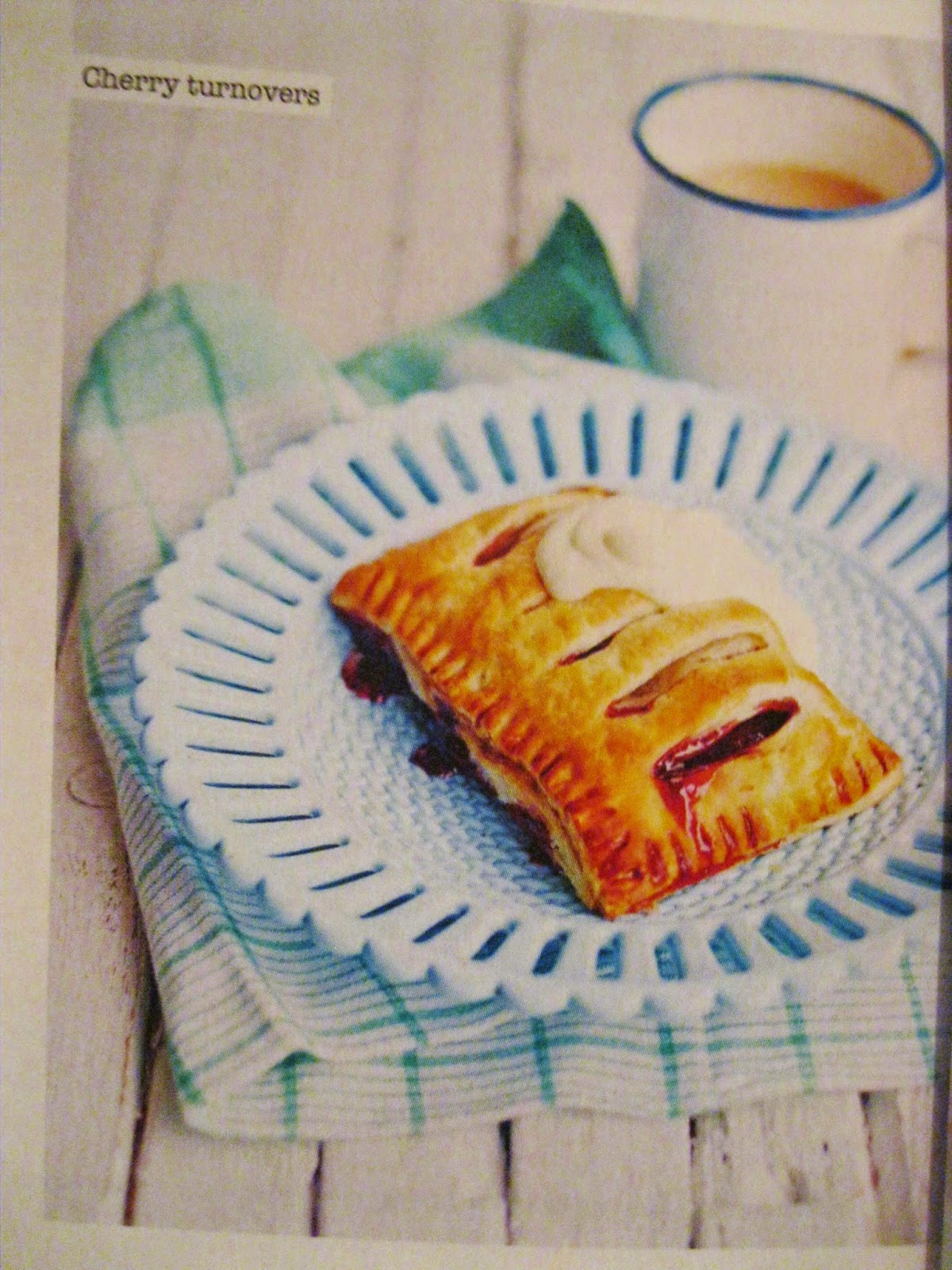 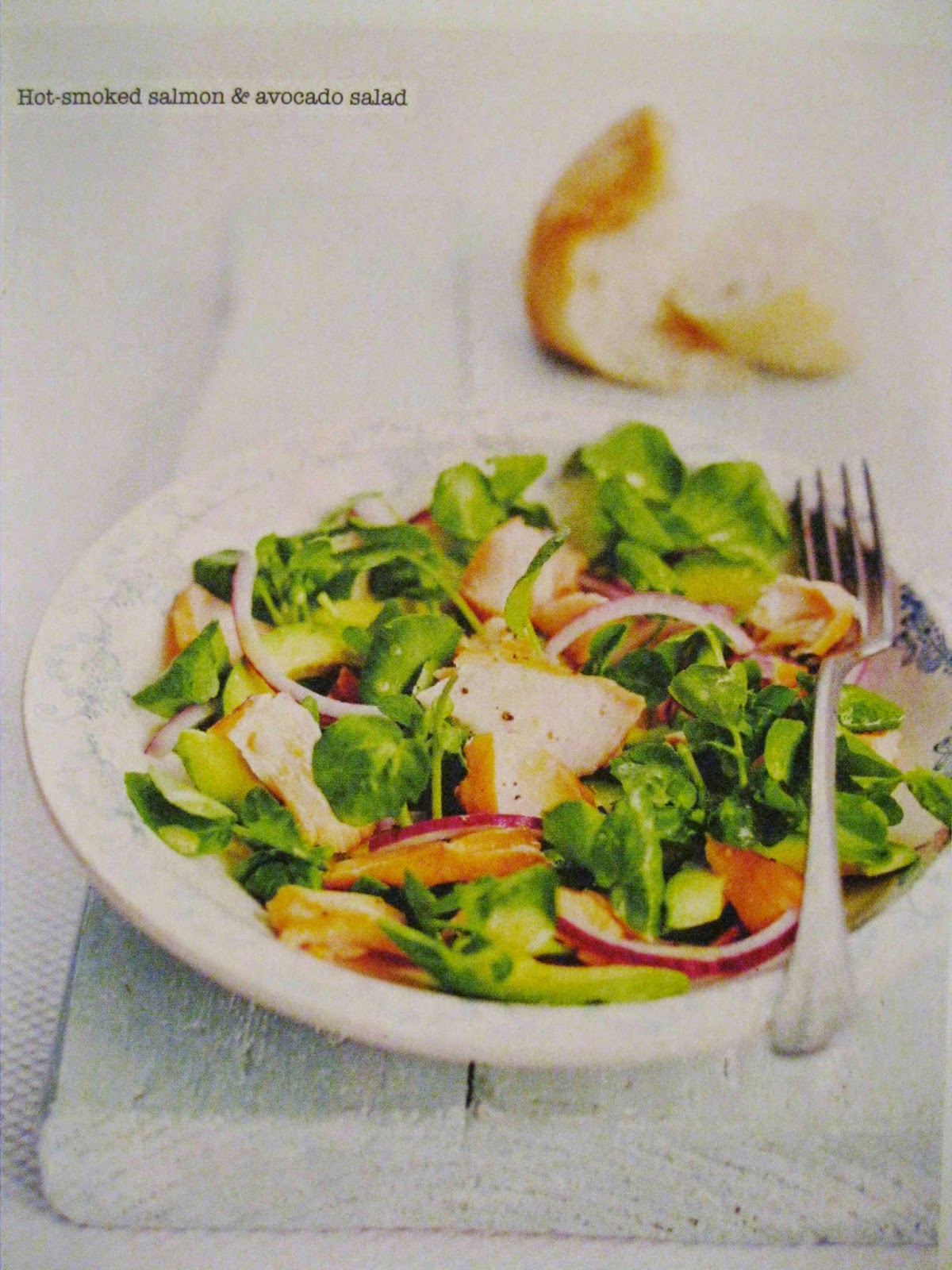 Posted by Georgie Hodgson at 09:08 No comments:


This is a simple recipe that I knocked up on a weekday evening, as I had just harvested my first tiny red chilli's from my chilli plant (huge excitment). I also had some fresh baby green garlic (sort of like a garlic flavoured spring onion) from the garden that I wanted to use. I didn't follow a recipe, it was just a case of throwing in a bit of this and bit of that, but below is roughly what I did. You could add some creme fraiche too if you wanted to make a creamier sauce. Spinach might be nice also- it's a really versatile recipe- just throw in what you fancy or what you have knocking around in the fridge! It was a nice light and fresh pasta dish, and couldn't be simpler.

1 small red chilli, chopped finely
A bulb or two of fresh green garlic (normal garlic will do if you haven't got this) chopped finely
Good glug of olive oil (enough to lightly coat all the pasta)
Spaghetti or Linguini
1 zest of a lemon
Bunch of fresh parsley, chopped finely
250g prawns (or as many as you want)
Salt & pepper

Boil the pasta in salted water (the salt is essential- any cook will tell you). Add the chilli, garlic and olive oil to a pan, and heat over a medium heat for a minute. Add in the prawns and cook for a couple of minutes until hot right through. Add the cooked pasta when it's ready, and stir through, making sure it's completely coated in the oil. Add the lemon zest and fresh parsley and remove from the heat. Season to taste, and finish with a bit more fresh parsley and lemon zest on the top. Super simple supper! 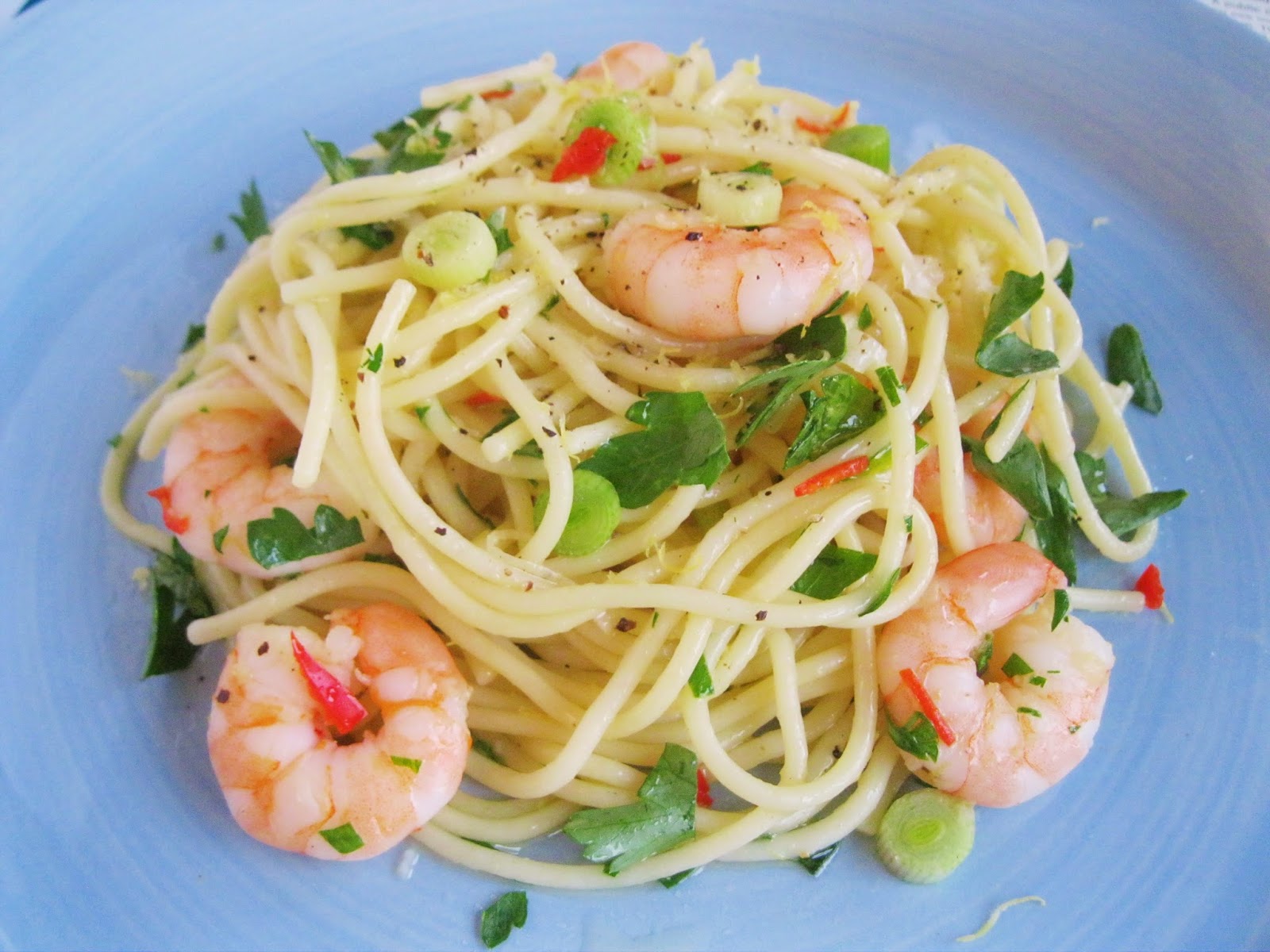 Posted by Georgie Hodgson at 10:02 No comments: